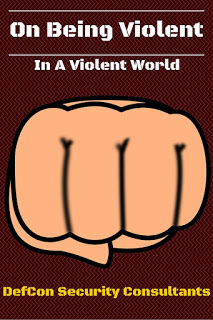 As far as nice, polite, functioning adults in civilized society are concerned, some of the basic tenets of a self-defense course are harder to embrace. I see this same problem play out in every self-defense class I teach: I have to urge – practically beg – people to engage in the act of defensive striking.

One would think that teaching someone – especially a man – to physically strike a target would be the least of my concerns.  In fact, it is actually the most prevalent problem, and it manifests in two stages.

The first stage of the problem to overcome is getting students to actually breach the distance between themselves and their training partner. More often than not, students will attempt to stand just out of arm’s reach and lean in to strike the uke (the person getting hit). Social etiquette demands that humans maintain an acceptable distance between ourselves and other people; we have an innate ability to determine comfortable social spacing and position ourselves accordingly.

Of course, a predator doesn’t give a damn about social etiquette.

So early in self-defense training comes a lesson in violating social norms. As defenders, students have to know and understand that their best defense is going to take place at close range – ranges that normal socially adapted adults are just not comfortable with. Predators have no compulsions when it comes to closing the distance, so students have to train from ‘inside the bubble’ (our pre-set personal space boundary) in order to more effectively defend themselves.

This isn’t the easiest thing to get students to do, so there’s a bit of social reconditioning that needs to take place, usually in the form of instructor encroachment (when I put myself in their space intentionally). It has never failed that students cringe when I step inside their bubble and just stand there.  My first contact with a new student is usually to grab a wrist. Before the end of the class, the student is comfortable enough with my presence that they allow me to curl my fingers around their neck in a choke.

The social reconditioning is an ongoing process and is repeated in each class.  Once the student has gained a degree of comfort working in range, I can begin to address the second stage of the problem.

From the time we were small children, parents, teachers, and other authority figures have told us not to hit one another. Punishments (ironically including spankings) were meted out for any transgressions of this sacred law. Hitting is bad, and most of us have learned this lesson well. Unfortunately, we obey this social rule even to our own detriment.

The first time I ask students to hit me, our co-teachers, or their training partner, the results are very predictable: a timid and half-hearted strike that is usually followed by an apology. The psychological hurdle students must jump in the process of learning to hit another human being is unusually high, and few are the new students who can actually do it the first time out.

For that reason, it takes a bit of coercion to get students to commit to a strike.  It’s easy with mothers; often it’s a matter of telling her, “This man wants to hurt your child.” Hell hath no fury, and all. Some men can be convinced to commit to striking with, “This a**hole wants to rape your girlfriend.” Sure, it’s a bit strong to say that, but it is quite effective.

It is the unattached man and woman who are a bit harder. Whatever the prompt, it has to be something that breaks the hold of their childhood training against violating others.

Interestingly enough, once that first crack forms in their mental wall, its collapse is fairly rapid. I’ve witnessed students who were completely adverse to hitting a padded uke start with tepid little strikes only to find that, with repetition, they actually enjoy it. A feeling of power that they had not realized they possessed has suddenly found its way into their consciousness.  By the time I call an end to the exercise, they almost always ask, “One more?”

There’s no such thing as polite self defense when actual physical defense is needed. A lack of commitment in the actual practice is the primary ingredient in the recipe for disaster. Unfortunately, we have been conditioned for our entire lives to play nice and not hit. Breaking past that mental barrier takes time and intentional practice.